Ramón Sánchez, president of the Association of Sommeliers and Friends of Wine in Castilla La Mancha, opened the day that took place at the premises of Bodegas y Viñedos Verum de Tomelloso on Monday March 13th: “a day to celebrate for sommeliers and wine professionals”.

14 sommeliers underwent a demanding theoretical test and blind tasting to select  the 3 finalists: Valentín Checa, who is currently working in the Ormer Mayfair restaurant in London. Jose Carlos Rodriguez Maroto, from El patio Chato Grato in Valdepeñas and David Alcántara from Oliva Garden restaurant in Jaén.

According to the jury, the winner was Valentín Checa, who gets the trophy for the third consecutive year and together with José Carlos Rodríguez will represent Castilla-La Mancha in the national final to be held in Madrid next April.

The members of the jury were  Custodio López Zamarra, Rafael Bellido, Sergio Castillo and Marilú de Torres who had the responsibility of evaluating the finalists’ tests: the service of the sparkling Gran Cueva, the foodpairing, proposing different wines and the most visual one, that is, decanting and service of the red Verum Coupage.

While the written test was being carried out, members of the sommelier association and the jury toured the winery and underground cellar where they were pleased to taste a brandy distilled in 1912. Contestants also made the visit and signed a Barrel on the occasion of the contest.

Elías López Montero, winemaker of the winery, remarked the importance of sommeliers in the sector as the necessary link between the producer and the final customer to the point of becoming opinion leaders of the good wines from Spain. He also put in value the professional service in restaurants and the firm commitment of Verum to support these professionals. 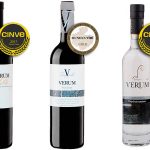 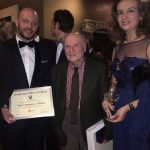