ULTERIOR PARCELA 17 BY BODEGAS VERUM, BEST GRACIANO IN THE WORLD

Ulterior Parcela 17 Graciano 2016 by Verum, with 95 points, has earnt a Gold Medal in Decanter Wine Awards, one of the most challenging and prestigious contests in the world.

No other wine from Castilla – La Mancha had ever scored such a high mark in the contest history, which marks a milestone in our region. With 95 points, it ranks among the top three wines in Spain and 50 in the world, in the organic certified category.

Out of the 16 Decanter Awards editions that has taken place, only once has a Graciano wine ever achieved 95 points, and it was from La Rioja, the area where the variety has it origins. This is the reason why Ulterior Parcela 17 Graciano 2016 marks the way for a better-defined style, refusing the oak barrel and concentrating their varietal character thanks to the clay amphora. This medal adds to another gold medal granted by Mundus Vini last march.

ULTERIOR wine range begins to make history in Castilla – La Mancha and in Spain, 5 single varieties carefully chosen thanks to their ability to adapt to harsh climate conditions: endemic grapes such as Albillo Real and Tinto Velasco and foreign varieties like Garnacha, Mazuelo and Graciano, all of them organically grown in Romeral estate, where López Montero family wanted recover long forgotten varieties, and introduce the ones that showed a promising future in our region.

This acknowledgment in a way is a seal of approval for Elías’ vision of minimum intervention organic wines, unfiltered and respectful towards the vineyard natural quality, all without losing elegance and character. Elías along with his siblings, with Bodegas Verum and Ulterior wanted to go beyond, taking risks when no other would. Today, they achieve international recognition for bringing us the wines of the future, in every day’s land. 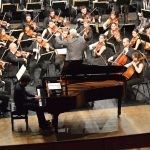 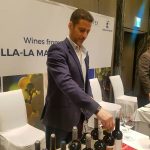 One Response to ULTERIOR PARCELA 17 BY BODEGAS VERUM, BEST GRACIANO IN THE WORLD