March 2017. Bodegas y Viñedos Verum welcomes the month of March being awarded new and important recognitions to its wines and distillates in international competitions.

Verum V Tempranillo Reserva Familiar 2010 adds a new gold medal to its record in the Mundus Vini 2017 contest, one of the most prestigious in the world, with more than 6200 wines from 150 wine regions of the world that are exposed to a jury of More than 200 international experts from 44 countries. This vintage already got a  gold medal in the Tempranillos Al Mundo contest 2015 and 2016. The 2009 harvest treasures more than 10 gold, silver medals and the highest commendations in international competitions and guides.

Two more items have been awarded a gold medal at the CINVE International Wine and Spirits Competition held from the 10th to the 13th of February in Huelva. Verum Roble 2013 a red wine with a 6 months aging in French oak barrels and made with Merlot, Cabernet Sauvignon and Tempranillo and Verum Grape Spirit Gewürztraminer adds a new gold medal to its successful history and so ratifying itself as the best distillate in the world in its category with a score of two tens of silver, gold and great gold medals in international competitions.

For Verum winemaker, Elías López Montero, these awards endorse the work the team has been doing since the foundation of the winery, a project based on the vineyard and respect for what comes from it: a meticulous process of selecting the best bunches of grapes and then sorting grapes from organic viticulture. 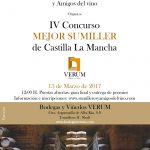 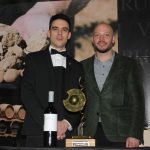