A group of scientists from the University of Castilla-La Mancha has worked for three years on the ‘CO2-AFP Strategy’ project in collaboration with the ALTOSA wine division (Alcoholes de Tomelloso, S.A.). Bodegas Verum, Premium wine division, will house the model winery to show this new development to produce sodium carbonate in a sustainable way and eliminating the emissions into the atmosphere, which could make it the first winery with negative emissions of CO2 of the world in the manufacturing process.

The 2021 harvest of Bodegas Verum will be the test bench for the elaboration of the first wines with CO2 capture, which will be later completed with the design and execution of the first winery with negative emissions in the world in the fermentation process with the capacity to capture more than 8.5 tons of CO2, while generating more than 20 tons of sodium carbonate in a sustainable way and reducing drastically the carbon footprint and thereby improving the environmental impact of all processes.

According to the group of scientists formed by Santiago García, Carlos Alonso Moreno, Jorge Enrique Zafrilla, Jesús Canales and the engineers Abdessamad Gueddari and María Paz García, together with the management and technical team of ALTOSA-VERUM, the reduction of the carbon footprint would improve the environmental impact of all the processes that are part of the following phases of the value chain.

A project with scientific endorsement.

The purity and yield of the sodium carbonate obtained exceeds 99.95 percent, which is the definitive push for its application on an industrial scale. According to the UCLM, the result is published in the prestigious scientific journal ‘Science of The Total Environment’.

The use of this technology by the main wineries in Castilla-La Mancha would reduce the emission of nearly 500,000 tons of CO2, 3.76 percent of the region’s CO2 emissions. If we extrapolate these data to the international context, the wine sector would be unique for its low emissions, the positive impact of the vineyard on the environment and the drastic reduction of CO2.

The high socioeconomic impact of this Project will contribute to the creation of a new growth vector for the regional economy. It has been in development since 2018 within the Carbon Dioxide Utilization (CDU) strategy.

VERUM is the Premium wine brand of the ALTOSA wine division, which has one of the largest extensions of organic vineyards in the world for its own production of wines, spirits and wine distillates for the production of brandy.

ARCHEOLOGY OF WINE IN TOMELLOSO WITH THE RECOVERY OF...
Next Story » 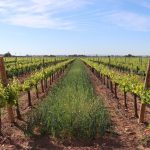